Yesterday was election day. The Social Democrat/Left Green alliance party that had stepped in as interim won.
I'm too lazy/busy to talk about it in my own words, so gerðu svo vel og þetta.
Posted by Shui Kay...er, Jennifer at 05:01 No comments:

Here's a link to the pictures Stefan, our tour guide, took of an excursion to Snæfellsnes.

More on that later.
*Update May 11*: Snæfellsnes is a peninsula north of the Reykjanes peninsula. Many people go there for daytrips because purpotedly it is mini-Iceland: most natural features of Iceland can be seen all in here. It is home to Iceland's newest national park. In all a day's time, we drove along the southern part of the peninsula, and then the north and then quickly came back down to RVK.

First, we drove to see some basalt columns. Did you know that the design of the big church in Reykjavik, Hallgrimskirkja, was inspired by these columns?

And then we stopped to see some seals. They are such wonderful creatures because they peer at you from a safe yet close distance, bobbing up and down, only their heads sticking out while you watch. No, we did not see any puffins and I do not care about whether or not I will see puffins because they are little brats!

Next we stopped at a fishing village in the southwest. We walked to the edge of the cliffs and below us were sandy black beaches and huge caves. Another part of it reminded me of the Bay of Fundy.

We drove through the national park. Personally, I wasn't very impressed by it as like most of everything else it was a wasteland. But it contained Snæfellsjökull, the volcano-glacier where, according to Jules Verne, one can enter the center of the earth.

We stopped at another beach area but then it was really windy and raining and I felt like I was going to catch a cold so I didn't pay much attention to where we were or why we stopped there.

The best part, though, was the shark museum. It's located on the northeastern part of the peninsula. As we pulled up into the parking yard, we saw a huge dead shark on a cart. Everyone of course jumped out of the car and crowded around the cart, quickly snapping pictures. People started poking the skin, which I felt repulsed by. It was a 110-year-old shark, caught the night before. They can live until 150 years, but it takes 40 years to ferment before it can be eaten. The owner came out - he's really passionate about his field of expertise and it showed - and after a while talking about the shark, he said, "Why don't we go to the drying shack. It's much more interesting." (in Icelandic he said all this). I loved the fact that what we thought was the most fascinating thing was mundane for him. We headed to the shack where fish was drying. There the owner told us the story of his travel to Italy. He had brought some fermented shark meat to his friend in Italy. The police eventually came knocking at the door and asked where he had put the corpse. Then we headed into the museum where a lot of neat fishing and shark things were displayed. 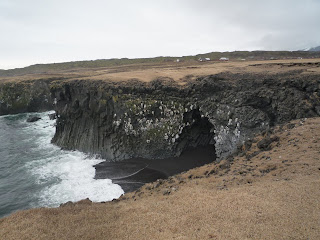 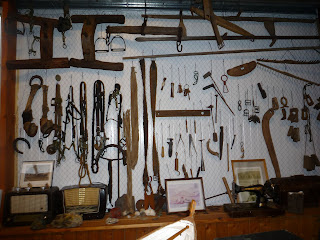 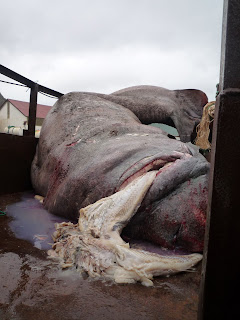 I figure it's taking too long to upload these photos manually so from now on I think I will have links to my flickr account. The photos of this entry are also available at the account. Enjoy!

The following were taking about three weeks ago, when the capital was holding a blues festival. These cars sort of invaded the public square for a while. 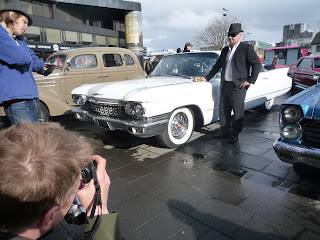 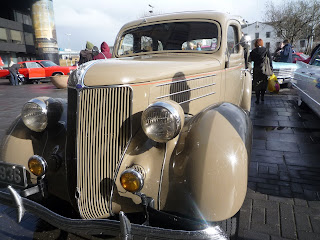 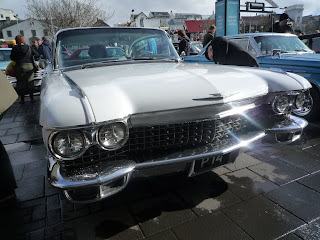 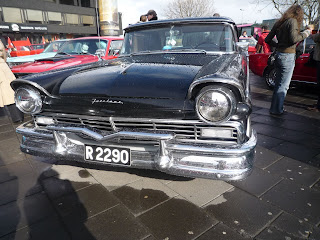 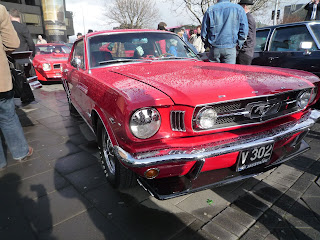 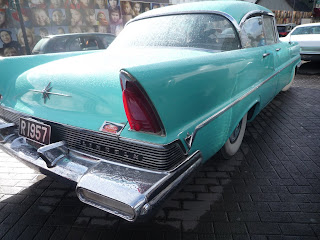 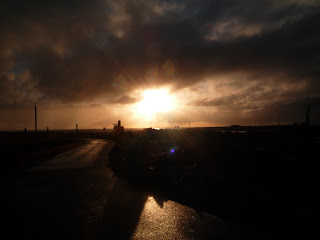 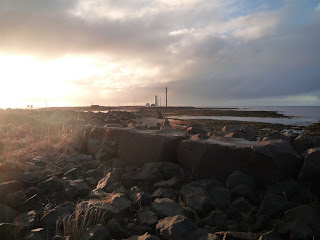 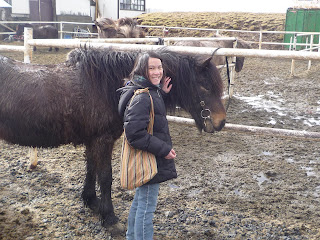 Me and the horse I was riding on. 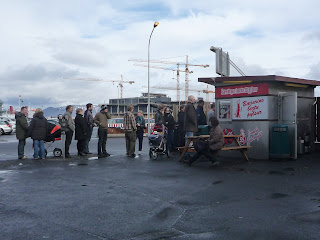 Most famous and delicious hot dog stand in town. The lines are there at all times of the day. A few days ago I learned Icelanders' most consumed foodstuffs are hot dogs and Coca-Cola. Diabete epidemic, anyone? Note the massive construction in the background. 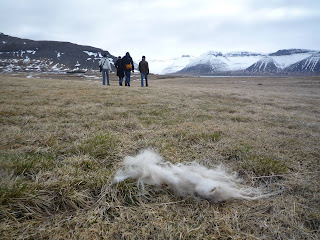 This is in Núpur in the Westfjords. A piece of wool left behind. 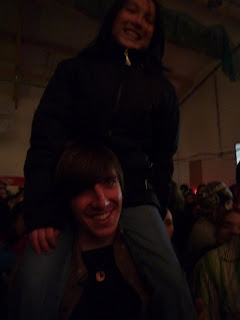 This photo looks kind of weird because I'm leaning to one side and DM to another. But this is at the concert. 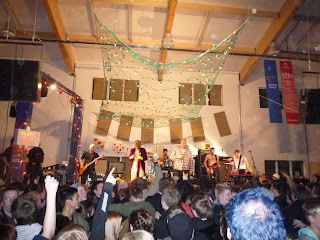 Dr. Spock, the Icelandic wannabe of the Kaizer's Orchestra! 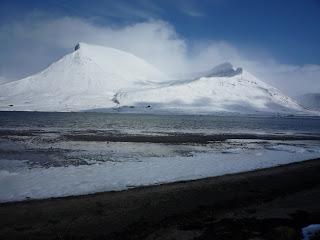 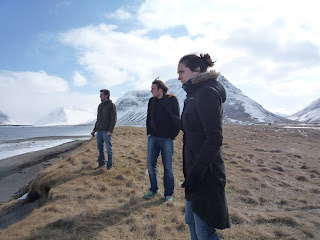 I must include this only because I think it looks like something out of a movie poster. I'm not saying I take cinematic pictures - it really just looks like that. By the way, they were looking at the scenery in the picture right above this one.
Posted by Shui Kay...er, Jennifer at 13:55 No comments:

As I am sitting in a room on a very sunny day, the wind is blowing at an incredible speed of about 22 m/s.
I am still very tired after 8, 9 hours of continuous sleep. My body still craves oatmeal as if it is in the dead of winter, and I am drinking chai tea as if preparing for a nasty cold. This country does this to you.
Even though the sun sets at around 9:30 and comes up around 5 now, the weather is still unforgiving.
The supposedly "sunny" days are laden with clouds. A nice day is rare. Next Thursday, the country will be celebrating the first day of summer (and two days later they will be holding the election). There is no spring. There is no spring!
Posted by Shui Kay...er, Jennifer at 07:31 No comments:

Last week was Iceland's Woodstock. Welcome to transplanted Reykjavik.
The trips there and back were really good - the first day I couldn't stop laughing for some reason.
The Westfjords were really different in the wintertime.
The festival was good. I met some people there who under any other circumstance I wouldn't have said hi to but I did!
On our way out of town, we put on Sígur Rós and the music really set the mood for what I was seeing.
And I got free popcorn compliments of Vodafone.
And a free poster because we were waiting for our bus back to Núpur where we were staying, a town 30 minutes outside of the centre.

Pictures soon, I promise.
Posted by Shui Kay...er, Jennifer at 15:59 No comments:

After months of harrowing (not really) applications, and nail-biting, letters of back-and-forth, I got an e-mail from my dad today saying that I was accepted into the J'explore program.

My first choice was Université Laval in Québec City, and I got it! I will be going there at the beginning of July for 5 weeks to be "immersed" in French. I've been reading some comments on the Internet and some say it is really good (especially since it's not in mostly bilingual Montreal). Others say that the program is like a camp for kids, complete with counsellors, save the 'lights out' time.

In any case, I will be able to continue this TRAVELS blog after Iceland. Which may or may not be a good thing for me and my very few readers.
Posted by Shui Kay...er, Jennifer at 15:51 No comments:

This is my 88th message on Blogger! I always notice things like this. Bonne chance to me.

For the Easter break, my German teacher warned that everything shuts down in Reykjavik and nothing and noone is to be seen, so GET OUT AS SOON AS POSSIBLE! I could've gone north, but I chose to go to the Westfjords again for yet another music festival 'Aldrei fór ég suður'.

So I have yet to go north.

Have I ever mentioned (probably) that in 2005, I discovered a Canadian artist on CBC radio 3 called Sabola.
One of the songs I heard and subsequently downloaded was called "The Long Road to Isafjordur". I thought, "Okay, this song is good, it really makes it sounds like a long journey. But this Isafjordur, I wonder what he was thinking about because it sounds like a made-up place."
Of course it sounded made up because it sounded like a place that JRR Tolkien would have penned, which in fact is true: Icelandic was an inspiration for that Elvish language or whatever.

And now I'm going there again! Weird how things come back to you again and again.
Posted by Shui Kay...er, Jennifer at 13:12 No comments:

I went horseback riding on the weekend for the first time in 10 years (previously I've been on the horse twice).

I must say I was quite nervous and when the horses started trotting I felt like I could fall off the horse at any moment.

Nuances in culture that I notice while I am travelling abroad or while I am immersed in intercultural experiences, which is as often as possible. The URL name is inspired by Esbjörn Svensson Trio's album name, because wherever I am, it's where it is a strange place for snow.